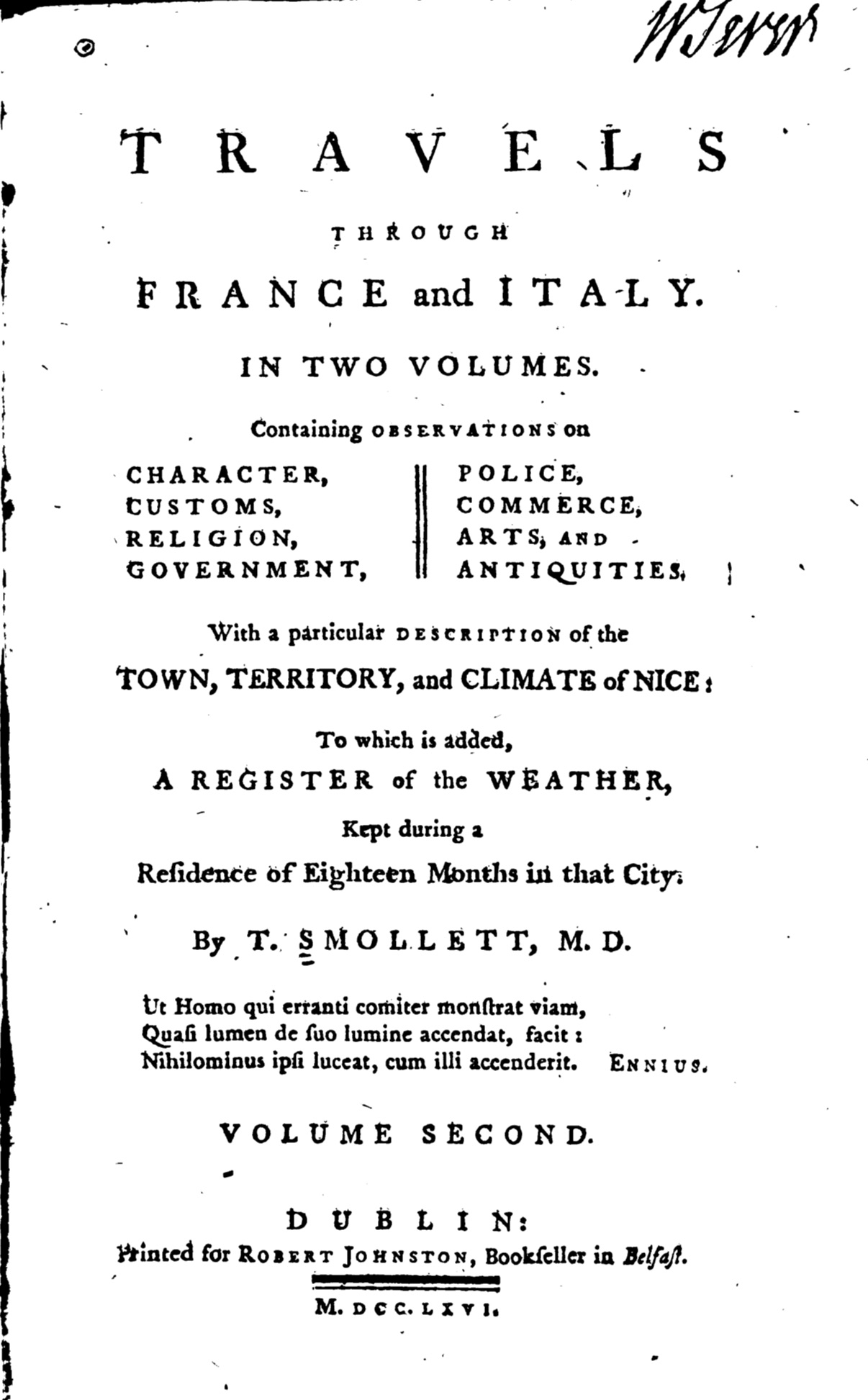 Tobias Smollett was an acclaimed novelist of his time, known for his picaresque novels, a genre of fiction depicting the comedic and satiric adventures of a  lower-class protagonist. His gift for writing is also reflected in the Travels, which is a personal account that also provides factual information based on other guidebooks. Smollett traveled with his wife across the European continent between 1763 and 1765 in an effort to find a more agreeable climate for his failing health. The letters that comprise his travel book were most likely written while he was staying in Nice. Based on his book, we can reconstruct his travel itinerary. He entered Italy through Genoa, traveled along the Mediterranean coast till he reached Pisa, and then headed to Rome via Florence and Siena.
His gives a critical description of the paintings on the walls of the Camposanto. The drawing is “incorrect, lame and unnatural,” he writes. Still, he recognizes the new developments in  art at the beginning of Renaissance. The section on the earth of the Camposanto is interesting. According to Smollett, the earth consumes bodies in nine days, instead of twenty-four hours, as other authors of his day such as Johann Georg Keyssler record. Smollett is not convinced of the legend, though, and writes of the earth, “it is no other than common earth mixed with quick-lime.” / DJ

“Between the cathedral and this building, about one hundred paces on one side, is the famous burying-ground, called Campo Santo, from its being covered with earth brought from Jerusalem. It is an oblong square, surrounded by a very high wall, and always kept shut. Within-side there is a spacious corridore round the whole space, which is a noble walk for a contemplative philosopher. It is paved chiefly with flat grave-stones: the walls are painted in fresco by Ghiotto, Giottino, Stefano, Bennoti, Bufulmaco, and some others of his contemporaries and disciples, who flourished immediately after the restoration of painting. The subjects are taken from the Bible. Though the manner is dry, the drawing incorrect, the design generally lame, and the colouring unnatural; yet there is merit in the expression: and the whole remains as a curious monument of the efforts made by this noble art immediately after her revival. Here are some deceptions in perspective equally ingenious and pleasing; particularly the figures of certain animals, which exhibit exactly the same appearance, from whatever different points of view they are seen. One division of the burying-ground consists of a particular compost, which in nine days consumes the dead bodies to the bones: in all probability, it is no other than common earth mixed with quick-lime. At one corner of the corridore, there are the pictures of three bodies represented in the three different stages of putrefaction which they undergo when laid in this composition. At the end of the three first days, the body is bloated and swelled, and the features are enlarged and distorted to such a degree, as fills the spectator with horror. At the sixth day, the swelling is subsided, and all the muscular flesh hangs loosened from the bones: at the ninth, nothing but the skeleton remains.”