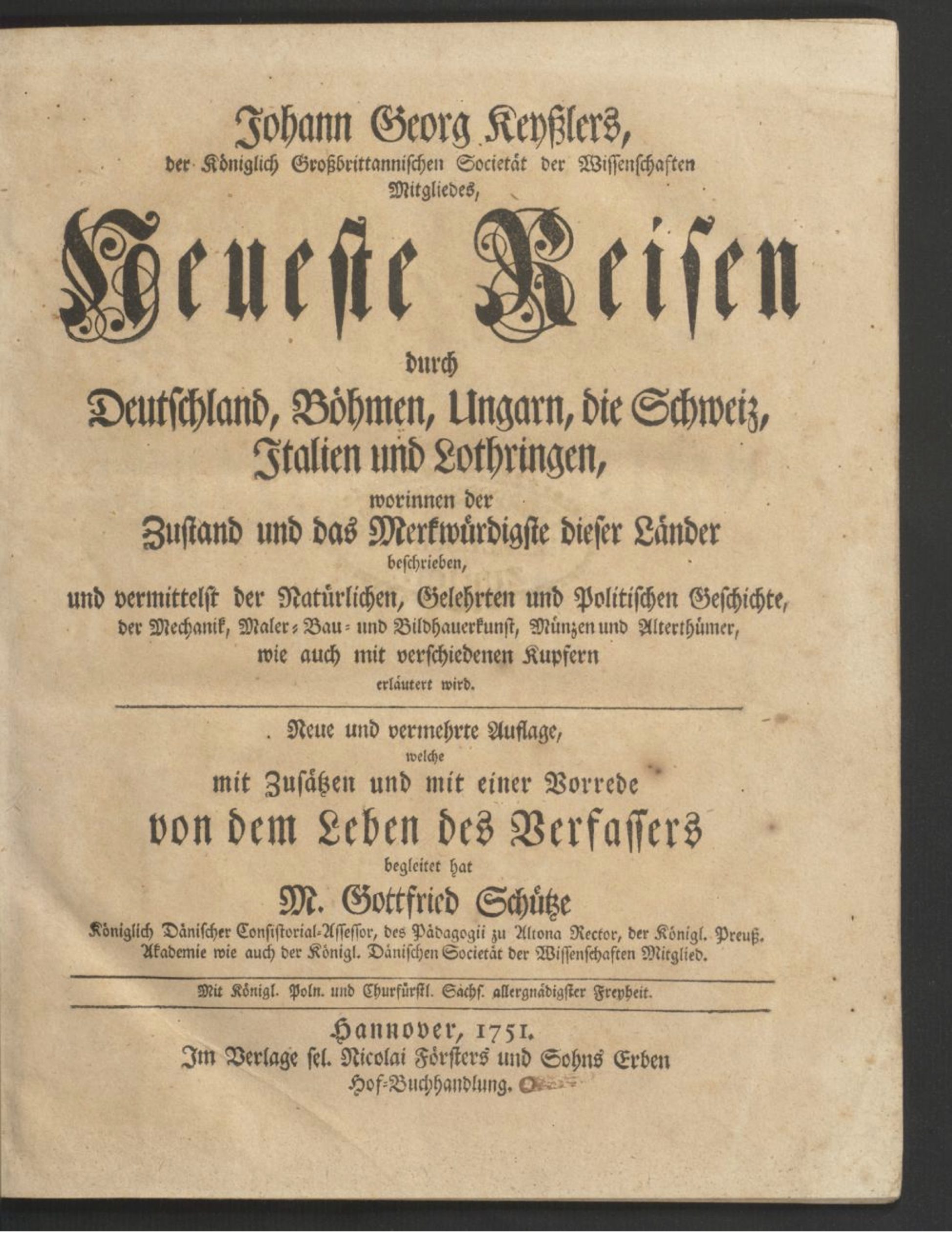 Johann Georg Keyssler traveled around Europe many times when he served the counts of Bernstorff. As tutor to the sons and grandsons of the counts, he traveled to England, Germany, Switzerland and Italy between 1716 and 1727, and he traveled to France, Holland and Denmark later. His travel account was written in the form of letters. It is notable that he devoted a whole section to Pisa in his book. In many other travel accounts, Pisa is usually mentioned only briefly as a short stop between Genoa and other cities in Tuscany such as Siena or Lucca. The description of Camposanto is also relatively comprehensive and does not simply focus on the legend of the holy earth and the inscriptions of the building, as is often the case in earlier travel literature.
Keyssler’s mention of the holy earth strongly differs from earlier writers’ in that he states that “this virtue [of the bodies consumed by the holy earth in twenty-four hours] is long since lost”. If it were still the case, he writes, he would attribute this “virtue” to the use of lime. Keyssler is also the first writer among the literary sources collected on this blog to refer to the plague as one possible reason for the decrease in the miracle of the holy earth. / DJ

“Il Campo Santo, or the city burying-place, is an oblong piece of ground, with a gallery round it, and divided by low stone walls into three equal parts; in the uppermost lie the nobility, the citizens in the middle, and the peasants in the lowest part.

In the year 1228, the Pisans having sent fifty galleys to the holy war, as auxiliaries to the emperor Frederick II. the commanders, probably in imitation of the pious example of Helena, grand-mother to Constantine the Great, who sent a quantity of earth from the Holy Land to Rome, took in a cargo of the earth, near Jerusalem, brought it to this Cœmètery, where it was observed to have such a singular quality, that it caused the bodies interred in it, for the first eight hours, to swell prodigiously, which in the succeeding eight hours, shrunk again to their natural proportion, and within eight hours more, were consumed to the very bone, but this virtue has been long since lost; and if it ever existed, it was certainly owing to a mixture of a great quantity of strong lime; so that the supported miracle might be easily renewed, if the burial-place did not afford room for many more than the inhabitants of this desolate city. The Pisans have a tradition, that this virtue, of consuming dead bodies within twenty-four hours, was observed particularly to decrease in the time of the plague, or any epidemical distemper, by reason of the unctuousness communicated to the soil, from the great numbers interred in it. The galleries were built by Giovanni Pisano, and finished in 1289.

On the walls are several scriptural histories, painted by several hands, among which the history of Job, in eight pieces, by Giotto, deserves particular notice. Bennoti Florentini, who is also buried here, has adorned this gallery with the life of the patriarch Joseph, in four compartments, and to Bufalmaco or Andrea d’Orgagna, who died in 1389, it owes a very large representation of the Last Judgment, in the middle of which is seen king Solomon hanging down his head, with all the other signs of a guilty conscience. On our Saviour’s left hand, hell is represented, and on his right the mansions of felicity, crowded with monks and nuns: However, an angel is seen to take the freedom of dragging away a monk by the hair, as not qualified to be in such good company. The invention of this piece is said to be borrowed from Dante’s poem on this subject. Of the other paintings to be seen here those of Benozzo Gozzoli are the best, who has very happily introduced into his historical pieces the portraits of the most eminent persons in his time. In one of these galleries or porticos are seventy or eighty large marble coffins, which by reason of the admirable bas-reliefs they are adorned with are supposed to be the work of antiquity.”