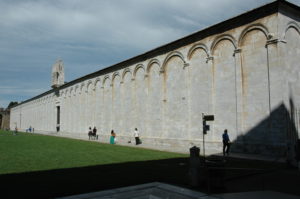 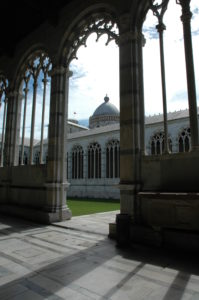 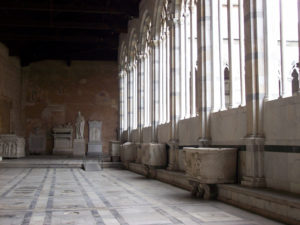 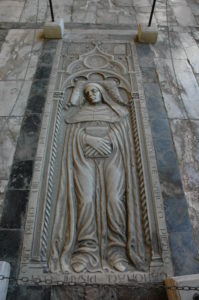 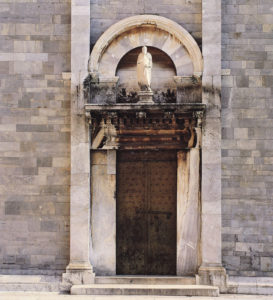 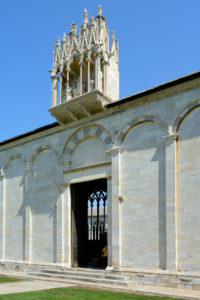 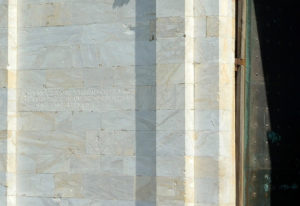 As the cemetery of the cathedral, the elegant construction in white marble on the north side of the Piazza del Duomo is the successor to an older burial site that had been situated in the open space around the Duomo (whose construction began in 1064). Over the centuries, the graves seem to have occupied a vast area that extended from south of the cathedral towards the west, where the new baptistery was begun in 1152. The first time that we hear about the project of a new cemetery is in 1260, when the new head of the Opera del Duomo, Guido Spadaio (1260), took his oath of office. Guido’s promise to build a new cemetery was repeated by his successors Rinaldo Speziale (1260-70), Ranieri Vallecchia (1270-71) and Orlando Sardella (1271-82). As we learn from these documents, authority over the design and construction of the new cemetery was exclusively in the hands of the Opera del Duomo, an extremely powerful institution which by this time was under the control of the city government. The idea of moving the cemetery to a new place, and of erecting a building for it, was part of the city’s strategy of creating a public space around the Duomo that could be used for sacred and municipal ceremonies. In contrast, the project was not greeted with enthusiasm by the ecclesiastical authorities of the cathedral, who obviously feared losing control of the cathedral’s burial place. For many years, the bishop and the canons refused to cede the ground upon which the new building should rise. Only in June 1277, shortly before his death, Archbishop Federico Visconti (1254-77) decided to donate the piece of land that the Opera so urgently needed: an area between the city walls (built in 1155-61) and the via publica that ran from the Lion’s Gate to the northern flank of the cathedral. In the thirteenth century, this area consisted mainly of gardens planted with trees and vines that their owners – the bishop and the canons – had leased for agricultural use.

Whoever entered the Camposanto through the main door was confronted with an inscription recording the historical circumstances of the cemetery’s foundation: In the year 1278, at the time of Federico Visconti, the archbishop of Pisa, and Tarlato, the podestà, under the operaio Orlando Sardella and master Giovanni who built this. Yet what visitors are not told is that the building that can actually be seen on the Piazza del Duomo has little in common with the project designed by “master Giovanni” (who can probably be identified as the Pisan architect Giovanni di Simone). As the documents from the early building campaign suggest, the cemetery initially consisted of an open field where the burials would have taken place, surrounded by walls. For this area, a new name was invented: campus sanctus (holy field). Probably this formula, which we first encounter in a document from 1278, was chosen to substantiate the questionable holiness of a burial ground that had been detached from its mother church, the city’s cathedral. In order to cope with this lack of sanctity, a new sanctuary was erected at the southeast corner of the cemetery: the ecclesia campi sancti, dedicated to the Holy Trinity. In the early fourteenth century, during the tenure of Burgundio di Tado as head of the Opera (ca. 1298-1319), the new church was completed up to the roof, furnished with an altar and decorated with statues and paintings. This sanctuary, a one-nave hall, accessible from the piazza through a now-closed door in the fourth bay, contained the infrastructure for funerary services and memorial liturgy. 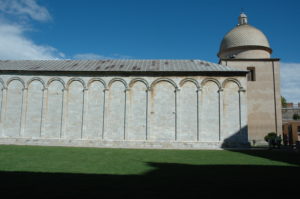 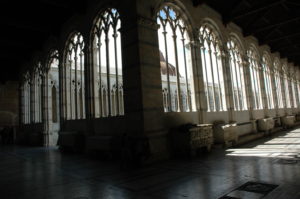 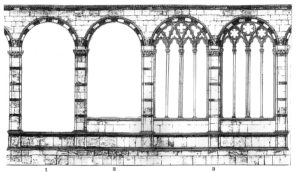 Under Burgundio’s successor Giovanni Rossi (1319-32), the first Camposanto project was abandoned in favor of a revolutionary new masterplan. A visible record of this change is the tabernacle over the main entrance, executed by Lupo di Francesco, where a layman – who has been identified as Giovanni – is represented kneeling before the Madonna. Following the new plan, the Church of the Trinity was largely dismantled, only a few years after its completion. The sanctuary had to make space for an entirely different project: four corridors of enormous dimensions that were to be erected around the open space in the center. While the ground plan of this structure followed the well-established model of a cloister, it departed from this prototype in its giant proportions and in its different use: unlike a claustrum,  the galleries were conceived as public space. Moreover, they provided a roofed area for hundreds of stable burial places, which were arranged in a regular grid. Here, a new civic burial practice could be established. Complementarily, the open, garden-like space in the center offered other options for interment, be it the widespread variant of an anonymous burial in a textile body bag, or the more exclusive one of free-standing sepulchral monuments.

Both the galleries and the treed lawn were closely interrelated. In their initial form, the corridors opened in a series of round-arch arcades over low parapets that facilitated the view of the green. Six doorways enabled visitors of the Camposanto to enter the open area. To fully understand the importance of this close connection, it is crucial to recognize that the revised Camposanto project was based on a new concept of site-specific sanctity: instead of the sanctuary of the church, it was now the soil of the campus itself to which an extraordinary degree of holiness was attributed. As it seems, it was in the decades preceding the middle of the fourteenth century that a new account regarding the origin of the soil inside the Camposanto developed: the ‘legend of the holy earth,’ which gave the notion of the campus sanctus an entirely new meaning.

From the 1320s onwards, the construction of the cemetery proceeded steadily and without interruption. Starting at the southeast corner, larger portions of the eastern and the southern galleries must have been completed by the early 1330s, when Francesco Traini (active between 1315 and 1348) and Buonamico Buffalmacco (active between 1315 and 1341) executed their monumental frescoes in this area. By around 1340, the entire south gallery was finished and building continued in the short western corridor.

At this point, the cemetery’s facade towards the Piazza was completed: its two portals corresponded to the main entrances of the cathedral and the baptistery. With its revetment of white marble, the Camposanto was harmonically integrated into the overall ensemble of the Piazza. Its decorative scheme, a regular order of slender pilasters crowned by arches, had already been introduced for the church of the first project, whose external walls were integrated into the perimeter of the second project. Instead of then-modern “Gothic” tendencies, the design of the facade followed the Romanesque forms that had been used for the side walls of the cathedral two centuries earlier.

In the western, northern and (perhaps) the remaining part of the complex, building activity seems to have continued at a slower pace, arriving at completion only in the last years of the fourteenth century. Certainly this deceleration resulted from the difficult economic and political situation of the sea republic in the decades following the Black Death in 1348/49. A telling detail in this regard is that, though the northern wall contained a series of fourteen round-arched openings for private funeral chapels that were expected to be built by wealthy families, only two of these were realized, obviously due to a lack of demand.

With the completion of its much-admired leaden roof towards the end of the fourteenth century, the Camposanto was basically finished – only a few years before the city lost its autonomy and came under the dominion of its rival Florence. Yet, several decades after this traumatic event, building activity resumed: between 1451 and 1463, the wide openings between the Camposanto’s galleries and the central green were transformed into quadrifora windows, by inserting filigree tracery in marble. The importance of this intervention should not be underestimated: these additions were conceived as a framework for stained glass windows meant to protect the galleries against rain and cold weather. A first series of these was executed and installed in the eastern part of the southern gallery. While this project remained a short episode (the windows were transferred to the cathedral as early as 1490), the remaining stonework gave the Camposanto’s interior a decisively “Gothic” appearance.

A last change that significantly altered the structure of the building was the addition of a huge chapel in the center of the eastern gallery. In contrast to what has been stated by many modern researchers, this space did not exist prior to 1475: all the altars that were needed for liturgical celebration had been erected along the wall of the eastern gallery. Construction of the new chapel was begun according to Archbishop Filippo de’ Medici’s (1461-1474) last will. Left unfinished in the fifteenth century, the sanctuary assumed its definite shape under Archbishop Carlo Antonio dal Pozzo (1582-1607). Projecting far beyond the roof of the galleries, the chapel with its high dome created a new focal point at the eastern end of the cemetery’s longitudinal axis.

Introduction  The Earth   The Paintings   Damage, Destruction and Restoration