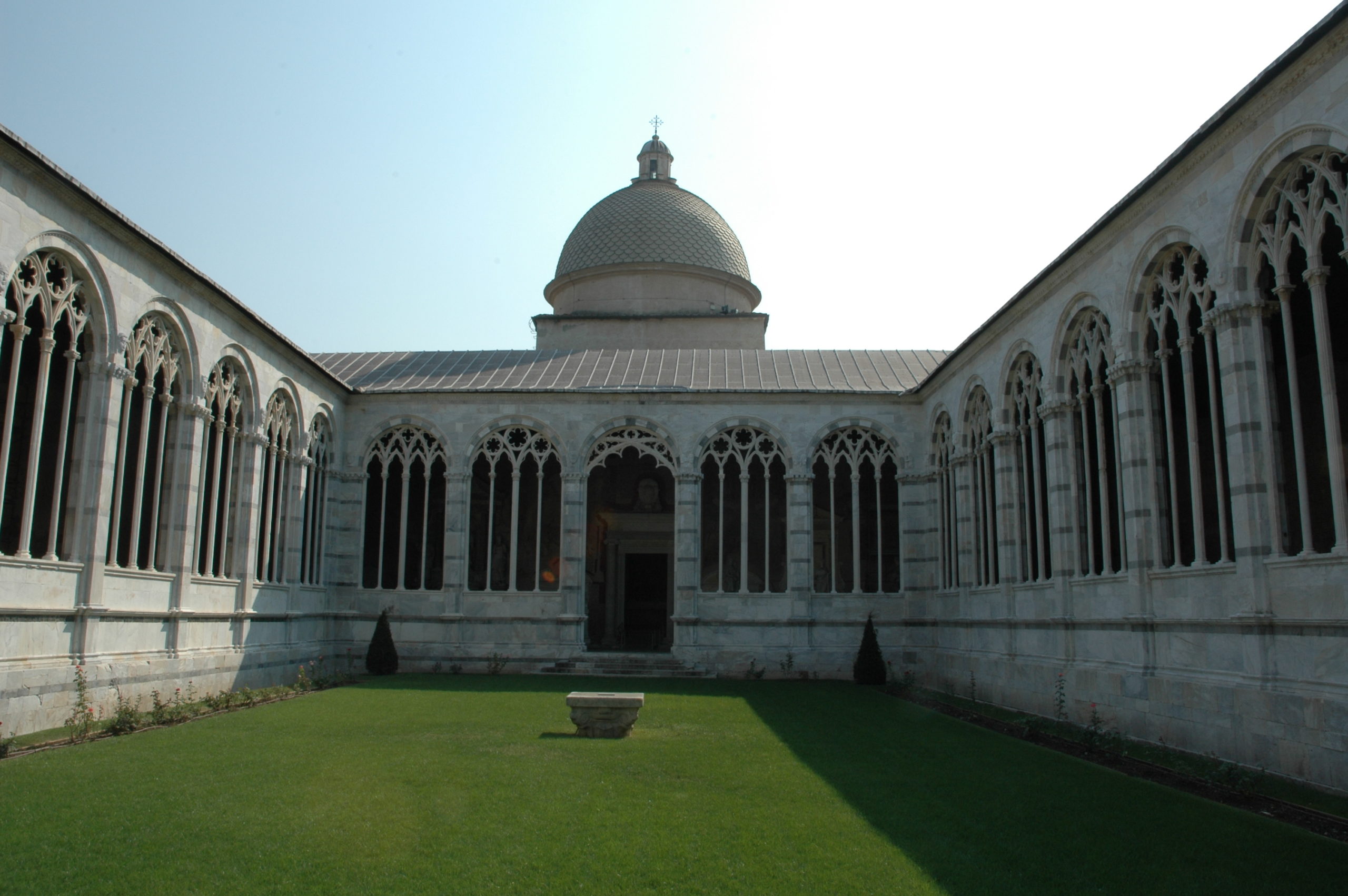 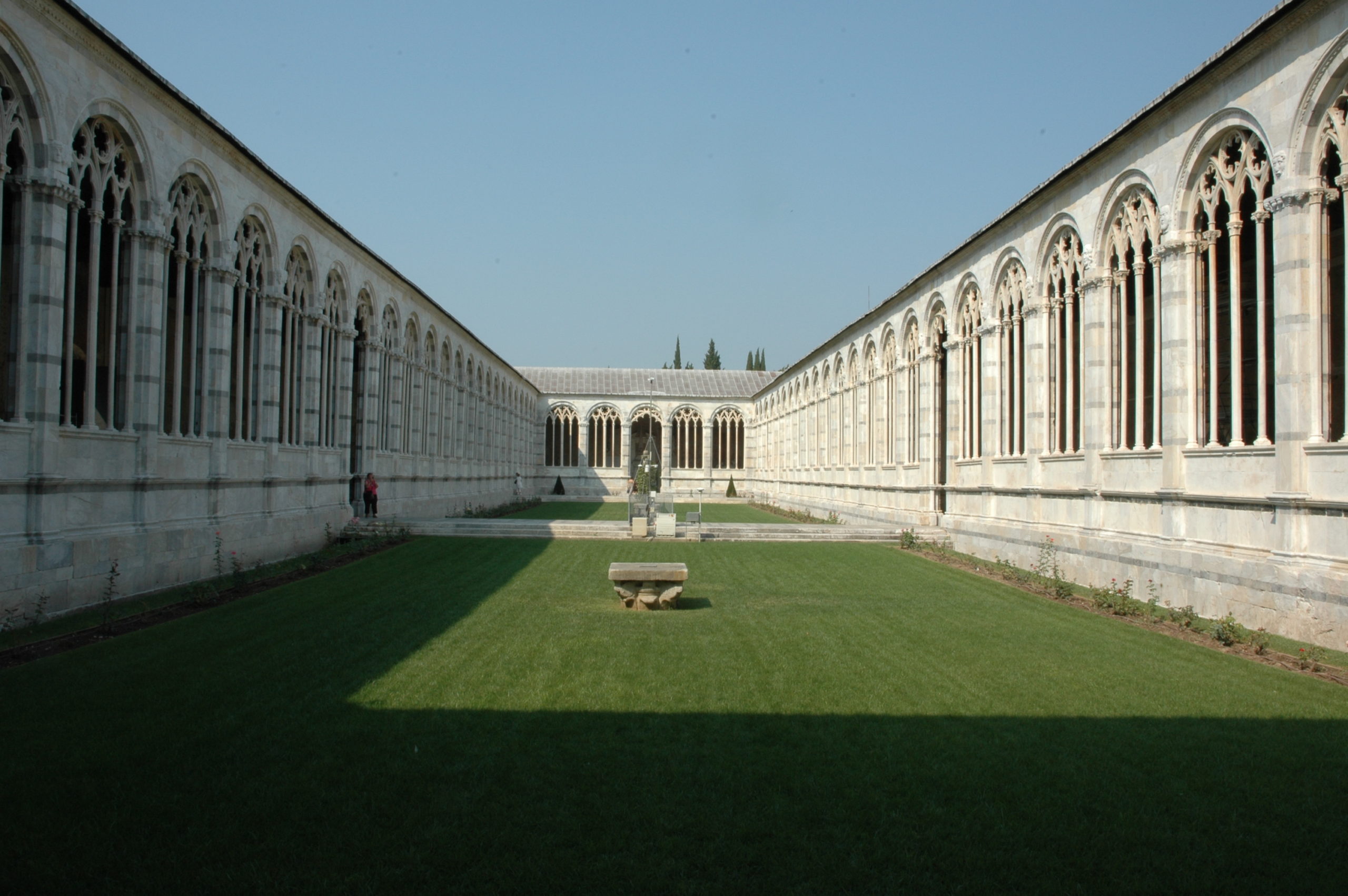 As the descriptions gathered in this blog tell us, the main narrative about the Camposanto’s origin that circulated in the late Middle Ages and the Early Modern period differed remarkably from the evidence of the archival sources and the building itself: the protagonist of this narrative is soil from the Holy Land that the Pisan fleet is meant to have brought back from the Third Crusade (1189-1192). After their arrival in Pisa, the earth from Palestine was strewn over the site of the cathedral’s new cemetery. In most accounts, the instigator of this action and of the subsequent foundation of the Camposanto is Archbishop Ubaldo (Lanfranchi) (1176-1207). According to this “legend of the holy earth,” the Camposanto’s foundation took place at the end of the twelfth century.

As is evident from the sources that we have collected, the “legend of the holy earth” began to circulate only in the later fourteenth century. This means that the legend is relevant only for the second phase of the Camposanto’s building campaign, and therefore a typical case of a post hoc “invention of tradition”. The historical memory of the founders of the Camposanto in the year 1277 was supplanted by a myth located in a glorious past, when Pisa was actively involved in the heroic deeds of the Crusades.

The legend of the earth never took on a canonical form in which it was passed down. Instead, it seems to have circulated as a local oral tradition, with remarkable variance in its details. For the period of the Grand Tour, one might imagine locals acting as guides for foreign visitors who came to see the famous monuments of the Piazza. Certainly, the most noticeable addition integrated into the legend at a later point is the miraculous capacity to consume the skin and flesh of the buried corpses within a short time span, a “wonder” that is first reported by pilgrims of the fifteenth century such as the Castilian nobleman and courtier Pero Tafur (ca. 1410-ca. 84) and the Swiss Dominican Felix Fabri (1438/39-1502), and that would be met with skepticism only by travelers of the eighteenth century.

A lack of site-specificity

What is even more remarkable, from a modern perspective, is the lack of site-specificity in most versions of the legend. From the mid-fourteenth until the eighteenth century, indications about the origin of the holy earth were extremely vague: in many cases, vast areas such as the ‘Holy Land’ or ‘Palestine’ are indicated. And in the majority of the sources, ‘Jerusalem’ is named, without any specification of a particular place. Only in certain contexts did the desire for a more concrete story prevail: a few authors state that the earth was taken from the prestigious sites of the Holy Sepulchre, Mount Calvary, or the Josaphat Valley. Nearly all of these voices belong to the period between the sixteenth and the eighteenth centuries, the only exception being the Florentine goldsmith Marco di Bartolomeo Rustici (1392-1457), who composed his fictitious Dimostratione dell’andata, o viaggio al Santo Sepolcro around 1442-45. Very interestingly, Rustici is also the first author to report the opinion that the earth of the Camposanto was taken from the Akeldama – the burial site for foreigners and pilgrims – outside the city walls of Jerusalem. Since the fourteenth century, the Akeldama was sometimes given the sobriquet campo santo (or campus sanctus) by Christian visitors. Among the site-specific variations of the legend of the earth, this attribution holds a particular place: it is thanks to the connection to the Akeldama that the idea of soil with the capacity to decompose human corpses within a short time span was transferred to Pisa. With a certain insistence, the story of the Akeldama origin was brought into circulation by men who actually had travelled to Jerusalem, such as the aforementioned Tafur and Fabri. Since all these testimonies came from non-Pisan authors who had a first- or second-hand experience of Jerusalem, it seems that this version was propagated, for some decades, at the holy sites of the Eternal City, with the clear intention to enhance the prestige of the Akeldama. Pisans, on the other hand, do not seem to have had any interest in fostering this version of the legend. They adapted the idea of quick decay for ‘their’ earth without making any particular reference to the cemetery close to Jerusalem.

Returning to the lack of site-specificity in most testimonies of the legend of the earth – including all Pisan sources before 1593 – one can assume that two factors played a certain role: at least initially, the accounts clearly address the fact that the Third Crusade had been a failure. In fact, the Christian army never arrived in Jerusalem, which by then was held by Saladin. Hence, returning with earth from Palestine was perceived as a compensation for this military setback. Yet, the topographic knowledge circulating in a harbor city with excellent connections to the Near East may also have had its impact. The more people knew about the actual shape of Jerusalem and its holy sites, the more they would have been cautious (or skeptical) of claiming an origin in a (historically improbable) single spot – this would explain why such references are to be found in late sources of the sixteenth to eighteenth centuries.

On the other hand, the vagueness of the legend of the earth also afforded further benefits, in several respects: in Latin as well as in Italian, the formulas used for the Camposanto’s soil – terra sancta or terra santa – were identical for the material supposedly dispersed in the cemetery and the Holy Land as such. Several wills from the fourteenth century contain instructions that mention a burial “in the very place that is called sacred earth (in loco ubi dicitur la Terra santa)”. The basic assumption implicit in this formula is an equation between a burial in the sacred earth and a journey to the Holy Land, a journey that yielded benefits for the soul, carried the body close to the site of the Last Judgment, and revived the memory of Pisa’s glorious past.

Introduction  The Building  The Paintings  Damage, Destruction and Restoration