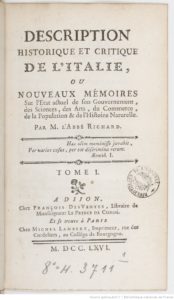 Jérôme Richard is not a well-known figure today, but his book (Description historique et critique de l’Italie) allows us to glean that he was a learned man, greatly interested in providing in-depth knowledge about Italy. Almost like a handbook on Italy, the book discusses both ancient and modern Italy while giving practical information such as the route from France. Richard even includes the chronology of the Roman emperors to provide exact historical information in volume 1, and volume 3 begins with a chronology of the different painting schools of Italy. At the Camposanto, it seems that Buffalmacco’s “Triumph of Death” impressed him most. He describes in detail the three coffins and the three noblemen looking at the coffins. The effect of the holy earth on corpses is not stated, as is the case with many other travel accounts from the early and mid-eighteenth century. / DJ

The Campo Santo, or general cemetery, is a very large public building, or cloister, built in a long quadrangle and surrounded by porticoes: it is made entirely of marble inside and outside. We see some ancient tombs along with others which may be called modern, although they are already very old and made in good taste. The cloister inside is entirely covered with very old paintings, which were done shortly after the construction, which is of the same date as the church, tower and baptistery. We see six paintings of the story of Job by Giotto, the Last Judgment by Orcagna, the Story of Saint Rainier by Simon Memmi. Next to the painting of universal judgment, the death of man and the state of their corpses is represented: we see three open graves; in one is a body that is beginning to corrupt; in the other the body is almost completely corrupted and begins to shed its flesh; in the third there are only dry bones. Several horsemen, who appear to be of distinguished rank, examine these corpses; one of them is covering his nose. We see that the scene is based on the effect of this cemetary’s earth, which is said to have been brought from Jerusalem and to have been used to ballast forty or fifty galleys of the Pisans; a singular devotion, but very much in the taste of the twelfth century. Of all the maritime powers of that time, the Pisans are the only ones who imagined transporting soil from holy places to their own country.