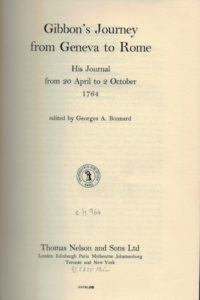 An English historian, renowned for The Decline and Fall of the Roman Empire, also made a Grand Tour in his young adulthood. Between 1763 and 1764, he set off to Italy via France. He visited Rome during this trip, which inspired him to write The Decline and Fall. His account of the Camposanto is brief, but it is long enough for readers to learn about his taste in art. The Camposanto was most likely not his favorite spot in Pisa as the frescoes were not to his liking. He states outright that “They are bad,” and the sarcophagi were “obscene.” According to Gibbon, the most skillful painter appears to be Raphael. Gibbon must have read other literature on the Camposanto as he mentions that the wall paintings are by the “first Restorers of painting.” There is no discussion of the effect of the earth brought from Palestine. /DJ

The Campo Santo is truly a unique and curious monument. It is a large gothic cloister of which the walls are painted by the first Restorers of painting, by Giotto and others. They are bad, but one must transfer oneself to the times when they were rare and precious. The taste and greatness of a state is only to encourage the best artists of their time. They couldn’t always train Raphaels. Inside the cloister is the graveyard of the Pisan people, filled with the holy land that their vessels brought from Palestine. Among these vestiges of devotion, we can see the pagan and often obscene sarcophagi with which the cloister is filled. As very few of them bear inscriptions, it is not known whether they are Pisan or foreign. I believe they are from the low centuries of paganism. I make this judgement based on the work, which is very bad, on the faces, which are mostly full, and on the shape of the letters, which are thin, pointed and Gothic. These sarcophagi are extremely spoiled […]