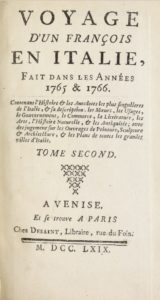 The French astronomer Joseph-Jerôme de Lalande visited Germany, Switzerland, Holland, Italy, and England during his lifetime. He kept a journal in which he noted down his impressions and observations most likely with the intention of eventually publishing them. His notes from his trip to Italy, made between 1765 and 1766, were published in eight volumes along with an atlas. Voyage d’un Français en Italie is a collection of everything that can be found in Italy, ranging from works of art and architectural monuments, to discussion of distances, the state of the roads, and the price of goods. His personal opinions are found rarely. / DJ

Emperor Frederick Barbarossa was rescued by the Pisans in his wars against the Milanese and they sent their Archbishop Lanfranc [Ubaldo Lanfranco] to him with 50 galleys when he wanted to cross to the Holy Land; it was then that they brought back their laden vessels from the land of Jerusalem and formed the Campo Santo, which we will discuss shortly. […]

The Pisa cemetery, or the mass-grave called the Campo Santo, is one of the most singular things of this city; it is a courtyard that is 450 feet long, surrounded by a vast portico built in 1278, based on the designs of Jean Pisan [Giovanni Pisano]: it has 60 crosses […]