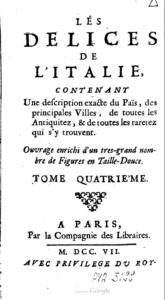 Les Délices de l’Italie is unique among the sources collected here because Henry de Rogissart wrote specifically about the cities, art and architecture of Italy. Unlike other travel accounts that were written based on grand tours the authors made, this book aims to convey extensive information just about Italy. As can be gathered from the fact that a German translation appeared soon after, and an Italian translation in 1709, Rossigart’s was a popular guidebook of the time. Even Montesquieu, who traveled Italy in 1728, hints in his journal that he referred to Les Délices during the trip. The illustrations and maps of Italy in Les Délices may have contributed to its popularity. The description of the Camposanto is not very detailed but still covers its architecture and paintings, and the legend of the holy earth. / DJ

North of the Cathedral is the Campo Santo, which is a cemetery that has been given this name because it is filled with soil from Palestine, which the Pisans brought from Jerusalem in the year 1228, when they sent aid to Frederick I to take the city. This earth used to have the virtue of reducing bodies to ashes in twenty-four hours; this is written on one of the walls. But as it has lost much of its first heat, it needs a little more time now to consume them. It is not surprising that the Pisans took the trouble to bring earth from Palestine; they were not the first: St Augustine and Gregory of Tours spoke of similar practices, and how much did St. Helena bring to Rome? But let us return to our cemetery, the land is not all that curious. It is surrounded by a kind of gallery like a cloister, which is entirely paved with marble and the walls are covered with beautiful paintings. On one side are the most beautiful scenes from the lives of the Fathers, and on the other side, stories of the Old Testament; all that is done by a good hand. One can also see the famous inscriptions, which the scholar Noris explained to us. This cemetery is 180 paces long, and it is filled with a great number of mausoleums; among these, there is one with the Hunting of Meleager so well represented in bas-relief that Nicola Pisano, who lived in the thirteenth century, got his training by repairing the sculpture.