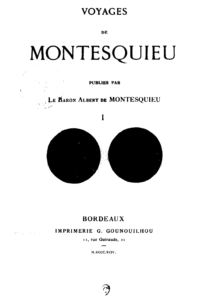 Charles-Louis de Montesquieu, better known today as a political philosopher, was also a judge and a writer. Besides practicing the law, he devoted himself to studying and writing. By the 1720s, he became an established writer and thinker, and in 1728 he embarked on a grand tour of Europe. Voyage en Italie was written in journal form, a style popular at the time for published travel accounts. Montesquieu’s interests range from the geographical, historical and social to the architectural and artistic characteristics of monuments that he visited. As for the Camposanto, it is notable that Montesquieu mentions not only the legend of the holy earth, but also writes a brief critique of the paintings. Although his description of the paintings is selective, Montesquieu seems to have found “Triumph of the Death” and “Hell” especially impressive. / DJ

Outside the Church, and next to it, is the Campo-Santo. It is a cemetery made of the earth that Pisan ships once brought from Palestine; this earth is said to have had the property of making bodies swell and dry up immediately. The cemetery is square, enclosed by a wall, around which is a gallery in the shape of a cloister adorned with marble. It is there that we find a beautiful collection of old paintings because the walls of these galleries are painted in fresco, and one can well see the bad taste of that time. It is there that we see the angels in wrath dragging the kings, queens, prelates, popes, monks and priests into Hell without mercy; but one does not see any painter there. One can see that the effort of genius was to find the most dreadful figures of devils. There are also paintings by Giotto, which seem to be in slightly better taste than the others. There is a whole side, which is exposed to the south, made by a single painter. The other side was done by several painters and in great number. It is said that they all died because they worked in a place exposed to the north. There is a part that was not finished, and which a more modern painter wanted to finish in the old taste; but he captured neither old nor new taste.