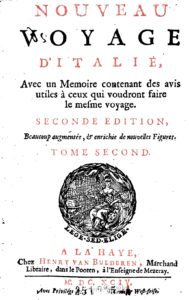 Misson was a traveler, author and protestant minister, who was born in Lyon but later took refuge to England on the revocation of the edict of Nantes in 1685. Serving as tutor to Charles Butler, who later became Earl of Arran, Misson made the Grand Tour in 1687 and 1688. He travelled by way of Rotterdam, Cologne, Munich, and Innsbruck, and reached Italy by going over the Brenner Pass. The record of his journey, which was published in The Hague in 1691, became a well-known travel guide to Italy for many decades to come. Sometimes referred to as the Baedecker of his time, he even included “Instructions to a Traveller” at the end of the second volume to give tips and advice to other travelers. It appears that Misson made a short stop in Pisa on his way back to England. The section on the Camposanto is brief. Misson states that the earth was transported from Jerusalem, but the legend of holy earth is not mentioned at all. /DJ

Translation: A New Voyage to Italy, with a Description of the Chief Towns, Churches, Tombs, Libraries, Places, Statues, and Antiquities of that Country (London: R. Bentley, 1695), 2: 159.

The burying place called Campo Santo, because of the Earth which the Pisans brought (marginal note: When they assisted Frederick the First, called Barbarossa, who took Jerusalem) from the Holy Land in the year 1228, is a kind of Cloister, 190 paces long and 66 broad, including the width of the porticoes. It contains a great number of tombs: here, I saw an ancient inscription fixed to the wall under one of the porticoes, which is a decree of the city of Pisa, occasioned by the death of Caesar, ordaining the people to wear mourning clothes for a whole year, and in the meantime to abstain from all public entertainments.