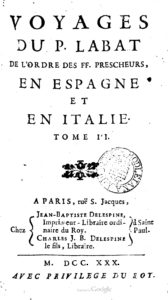 A Dominican priest and missionary, Jean-Baptiste Labat was born in 1663. After teaching philosophy for some years, in 1693 Labat obtained permission from the Dominican order to depart for the French West Indies. He first sailed to Martinique, and in the parish of Macouba he oversaw the building of a new church. In the next thirteen years or so, he stayed in the West Indies and visited English and Dutch colonies, such as Barbados and Grenada, and gained knowledge in engineering and architecture. He was also a naturalist and a scientist, and made records of the trees, plants, fruits and herbs of the islands. His experiences and observations were published in six volumes with the title, Nouveau Voyage aux iles de l’Amérique. The series was very popular and was translated into several other languages. His travelogue about Italy and Spain is less well known but it is still an interesting source of information for today’s readers. Beginning in 1706, Labat stayed in Italy for several years, and what he wrote about the Camposanto reflects his scientific interest. Unlike other authors, he not only mentions the legend of the holy earth, but also examines the legend in detail, which makes it an interesting source to examine in researching the Camposanto. According to him, the secret component of the holy earth was quicklime (chaux vive), with the property of consuming a body quickly. / DJ

The cemetery of the whole city is at the end of the church and is called the Campo-Santo, as in all the rest of Italy. It is a very large square piece of land, surrounded by porticoes like a cloister, supported by marble columns, covered with lead, and the walls are painted in fresco by skilled painters. Outside of these cloisters is the courtyard in which one buries the bodies of the dead. There is a great number of epitaphs, inscriptions and tombs and other antiquities about which one could write a book. It is said that fifty galleys from Pisa, which went to aid Emperor Frederick Barbarossa in the Holy Land, brought the earth of Jerusalem on their return, and that this earth, which was placed in the courtyard of the Campo Santo, had the property of consuming the bodies that were placed there in twenty-four hours. I am careful not to call into question whether the galleys of Pisa were loaded with earth; too many people say so, and besides, one should not afflict with a criticism, possibly a very fair one, a city that has been in affliction for several centuries. Apparently, the people of those times had devotions that are no longer in fashion today, or they could not find anything better to load their buildings with. But it is not this holy earth that had the property of consuming the bodies, which it no longer has at present, and to which it could be returned if wanted. It is the quantity of quicklime that was mixed with this earth. It produced this effect very recently and has always produced it in the same way as long as the lime has retained the principles of its action, but as this has been weakened, diminished and finally annihilated, the effect is also diminished, and, in the end, it had no more force on the bodies than ordinary earth. The only way is to put new, well-made, good quality lime like that of marble and pebbles, and the cemetery of Pisa will consume the bodies again in twenty-four hours. But what good is such a useless expense. The Campo Santo is very large, the city is still very poorly populated and when its inhabitants die in the course of a year, there will be room left over to bury them.