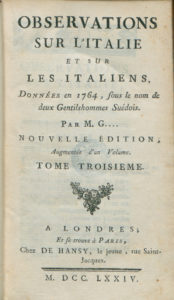 Grosley, a local historian and magistrate of his native Troyes, became well-known through his two travel accounts. One is about his observations in London and the English people (Londres. Ouvrage d’un François); this publication was well received. The other publication that made him popular was his travel account of Italy, initially described as the work of “two Swedish gentlemen.” The book begins with recounting that the letters of recommendation brought by the Swedish gentlemen gave them access to places and to influential people. Nouveau Mémoires ou Observations sur l’Italie attempts to provide a comprehensive account of history, geography, and the art and antiquities of Italy. The characters and customs of Italy is another focus of this book. The section on Pisa describes various aspects of the city, from its history, climate, geography to its architecture. It is curious that Grosley writes that the earth in the Camposanto still has the “virtue of totally consuming a corpse in the span of twenty-four hours.” Labat, who visited the cemetery in early eighteenth-century recorded that this property was long gone. / DJ

“This magnificence influenced even such religious observances, which seemed the most alien from it. Such is the famous burial-place, likewise built of marble, on the plan of that which I since saw in France at Orléans. The ground in the open part of this church-yard, is entirely of earth brought by the Pisans, in 1224, from the valley of Jehoshaphat, near Jerusalem, in the fleet which they had fitted out for Frederic Barbarossa’s expedition. This earth still retains the virtue of totally consuming a corpse in the span of twenty-four hours. The grave-digger affirmed, that this he very well knew from repeated instances on multitudes of Germans, who died at Pisa in the war in 1733. La terra, said he to me, logoravagli con le loro grosse pancie, in termine di duoi giorni (“The ground within two days made an end of them and their tun [large] bellies”).”