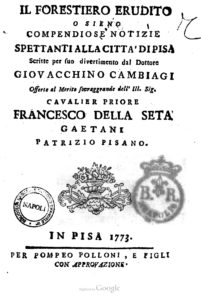 Gioacchino Cambiagi writes about the Camposanto in his Il forestiero erudito from 1773. He discusses the architecture and the history of the building as well as the paintings, although not in much detail. He does mention important dates and names that were part of the early stages of construction, and he also relates how it was finished under the archbishop Filipo de’Medici in 1464. Several artists are named, such as Spinello Aretino, Giotto and Buonamico Buffalmacco, and Gioacchino also describes the various figures painted in the Triumph of Death. He writes that the earth had had the power to corrode the bodies in twenty-four hours, but also that it had lost some of its potency, now taking fifty hours. / SB

This magnificent building has its origins in 1200, when the Pisan church was under Ubaldo Lanfranchi. After this work was entrusted to the sculptor and architect Giovanni Pisano in 1277, it was carried out with great speed; however, it was completed only under Archbishop Filipo de’Medici in 1464.
When you enter through the door, on the left, painted in fresco, are many scenes of the life of St. Ranieri by the hand of Simone Memmi Senese and Antonio Veneziano. Spinello Aretino was the one who painted the stories of the martyrs and the confessors, which have been damaged by time. And Giotto, the first disciple of Cimabue, was the one who painted the leprous Job who was abandoned by all. (75-76)

Going down the other aisle, one sees the Cosmos painted with all the celestial signs; and after that the Naming of the Animals, Adam and the Creation of Eve, all painted by the brush of Buonamico Buffalmacco. All the other stories, starting with the building of Noah’s Ark and ending with the Queen of Sheba, are by Benozzo Gozzoli who finished them in 1486. (78-79)

The ancient paintings of the Crucifixion, the Resurrection and the Ascension of the Lord are by Buffalmacco and by Antonio Vita from Pistoia […]
Returning to the corridor that leads us back to the entrance, we see the decay of the human body as expressed in the three cadavers, one has begun to decompose, another has been almost stripped [of its flesh], and a third has been reduced to bone (Note: At this point, it should be noted that Archbishop Lanfranchi brought miraculous earth from Jerusalem in 1200, and this for a long time had the ability to decompose cadavers in only twenty-four hours, but now it takes about fifty hours. However, some believe that this comes from the high lime content of the earth).
With those you can see on horseback, the Florentine painter Andrea Orcagna wanted to depict different rulers who visited the Camposanto. These are the ruler Frederick I, called Barbarossa, the ruler Louis of Bavaria, who, in order not to smell the stench, covers his nose, Castruccio Interminelli from Lucca (note: who goes by the nickname Castracani) with a hawk in his hand, and Ugoccione Tarlati from Faggiola in Casentino. […] Likewise, the Last Judgment was painted by Orcagna himself, where it can be seen how the angels separate  the chosen from the damned; among them is a Pope, whom the painter showed as Innocent IV. Hell, represented according to the description of Dante, is by Benedetto Orcagna, the brother of Andrea who was described above. Then one sees the tomb of Blessed John of Peace from Pisa. Finally, one sees the Anchorites, painted by Pietro Laurenti from Siena. Above the door, Simone Martini painted the Assumption of Mary. All around this building, which is 210 armlengths long and 72 wide, there are many ancient tombs decorated with bas-reliefs that are admirable for their antiquity. (81-85)