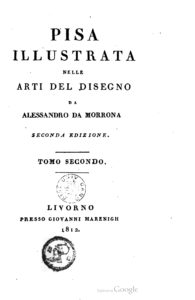 In his discussion of the Camposanto in Pisa illustrata nelle arti del disegno of 1787, Alessandro da Morrona refers explicitly to other authors such as Roncioni and Tronci. He begins by describing how the Pisans fought in the Holy Land, and how Ubaldo Lanfranchi brought the holy earth back to Italy and bought a piece of land next to the Cathedral. Giovanni Pisano is described as the architect that built the Camposanto in 1278 under Federico Visconti following the ideas of Ubaldo. Morrona also refers to Vasari and writes about the power of the holy earth, that it once had the ability to decompose bodies in twenty-four hours but that it had now lost this power. /SB

The chronological order leads me to present the famous Camposanto, the grandiose monument originating from the opulence of the Pisan Republic and the architecture of the thirteenth century, with which no other [monument] in Italy can be compared and from where the Pisans derive their destiny. The origin of its birth comes from the story of Can. Roncioni, by Paolo Tronci, by Ughelli, and also from the texts of other authors. These tell that the Archbishop Ubaldo Lanfranchi, by order of Clement III in 1188, under the leadership of the Pisans and united with the other naval powers of Venice and Genoa, went against the Turks and advanced as far as the vicinity of Jerusalem; and because he kept the troops closely within the range of the walls, he was able to visit Calvary, and his humble desire led him to remove much earth and bring it with the army in many ships. He then moved to where the other powers were planning to besiege Acre (Ptolemais), and it is reported that he received the entire command from them. But on the third day of his worthy reign (for three days, the Pisans had the voice of the ruler of the world), unrest arose in the camp due to the sad news of the death of Emperor Frederick, and Saladin, the leader of the Saracens, took advantage of the hour and attacked in a fierce battle, causing serious damage and a bloodbath among the frightened Christians. Thereupon Ubaldo gathered the people who were in the camp to seek refuge with the fleet and set sail with the wind for home, with little honor or benefit, as the anonymous chronicler writes in his history of Pisa. Then Ubaldo bought a piece of land near the Cathedral and there he distributed the earth he had brought with him and transformed the area to use as a cemetery. Sub eodem Presule (wrote Volteranno) Campum Sanctum dicavere ex terra, quam Hyerosolimis adducerunt, injecta nuncupatum.

Without error the authors wrote, and with them I say, the original idea of the Camposanto was conceived by Archbishop Ubaldo in 1200: and that later, in 1278, as the following inscription shows, the great building was erected, already as magnificent then as it is today, by the design and under the direction of Giovanni of Pisa during the time of Archbishop Federico of the splendid Visconti family.

The inscription is in a side-arch, where the main entrance is also located. Apart from a few strange but clear abbreviations, it says the following:

The internal structure consists of a part for the tombs with magnificent and grandiose objects and is richly decorated with sculptures and paintings, so that the soul feels joy and is amazed. Four large loggias enclose the large, uncovered cloister, divided into three fields, where the holy earth was placed, which, according to Vasecio, had the property of turning bodies into dust in just twenty-four hours. It lost this ability, however, long ago. […]

Vasari observed how a hermit milked a goat to lend a sense of naturalness. Another, whom he calls St. Macarius, shows some horsemen human misery in the form of three kings lying dead in tombs, in three different states of the body separated from the spirit until complete decomposition, and the alleged effects of the holy earth mentioned elsewhere. In this, Orcagna uses appropriate and meaningful attitudes for this sad reflection; and to make it analogous to the first drawing, he portrays various contemporary lords.