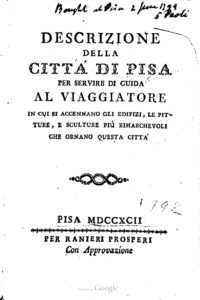 In his Descrizione della città di Pisa of 1792, Ranieri Prosperi gives an account of the history of the Camposanto, the architecture and the paintings. He agrees with other authors that it was Archbishop Ubaldo who brought the earth from the Holy Land and that he was the one who founded the Camposanto, although it was only in 1278 that the actual construction began under the archbishop Federico Visconti, with Giovanni Pisano as the master builder. His description of the building is quite detailed, and he too mentions the now-lost power of the earth to decompose bodies within twenty-four hours. Not only does he write about the architecture, he also discusses several paintings and painters, and refers to Vasari on different occasions. He also talks about the condition of the paintings. / SB

Arriving at the northern facade, we see four stories of the Creation of the World by Buonamico Buffalmacco, a painter from the beginning of the fourteenth century. In the first large painting is God who supports the universe. St. Augustine and St. Thomas are in the corners below. The second painting in the upper register shows the Creation of man, the Creation of woman and their Expulsion from Eden. The third one shows the sacrifice of Cain and Abel with the murder of the latter. The fourth painting is divided into three parts, depicting the building of Noah’s Ark, the Flood and Noah’s sacrifice after the use of the Ark. This work is decorated with squares and adorned with heads and portraits, among which is that of Buffalmacco, with a hood on his head and a rag hanging around his neck.

The paintings that decorate the other part of the facade on the left side, coming out of the chapel [of Pozzo] are by Buffalmacco. The first one shows the Crucifixion of the Savior, the second the Resurrection to life, the third the Ascension. Vasari praised these works.
Arriving at the south facade, we describe a part that begins on the left side of the door through which we entered. Now let’s talk first about the paintings and then about the cenotaphs and the other ornaments, as with  the other facades. And we begin with the order in which we see the great fresco painting, divided into several parts, in which the Triumph of Death is included. The Florentine Andrea Orcagna, who flourished in the middle of the fourteenth century, created it. The subject is taken from Petrarch, but I don’t know who is the greater painter, who appeals more to the imagination, Petrarch or Andrea Orcagna,. We also disapprove of the writings that describe the feelings of the figures depicted, because in a painting, the painting must speak and nothing else, otherwise we remember Sancho Panza, the squire of Don Quixote, who thought he had painted a rooster when he painted two blobs on the wall and wrote underneath: this is a rooster.
Here, as usual, there are many portraits of people and friends of the painter, but we cannot identify them because there are no other more interesting portraits than those of the people we love. (92-93)

So we resume the description of the paintings. The second large painting is one of the better preserved, shows the Last Judgment and is a work by the same Orcagna, who painted the aforementioned Triumph of Death close by. There is much bizarreness here, and it is worth looking at. The following painting is by Bernardo Orcagna, who is the brother of Andrea, who was summoned to Florence. The subject is the Inferno of Dante. Whether the painter or the poet was more bizarre and fantastic is not easy to decide.
This painting was restored in some spots in 1530 by the painter Solazzino, according to Vasari.
The last painting shows the story of the Anchorites and is by the Sienese painter Pietro Lorenzetti, a pupil of Giotto. Under this painting and above a marble chest is the Blessed Oliverio lying down, painted by Antonio Veneziano, says Vasari. Below this, in an ancient coffin, are the bones of Blessed John of Peace with a stone tablet in the wall in which a bad epigram alludes to this pious person.
Above the door through which we entered, inside, is the Assumption of Mary by Simone Memmi of Siena. It is well preserved and does credit to its creator, one of the most excellent painters of the fourteenth century. Here are described all the paintings and sarcophagi that are on or along the walls of this building. Let us now move on to the sarcophagi that are located along the foundation that supports the pilasters that carry the arches of the four loggias.” (94-95)