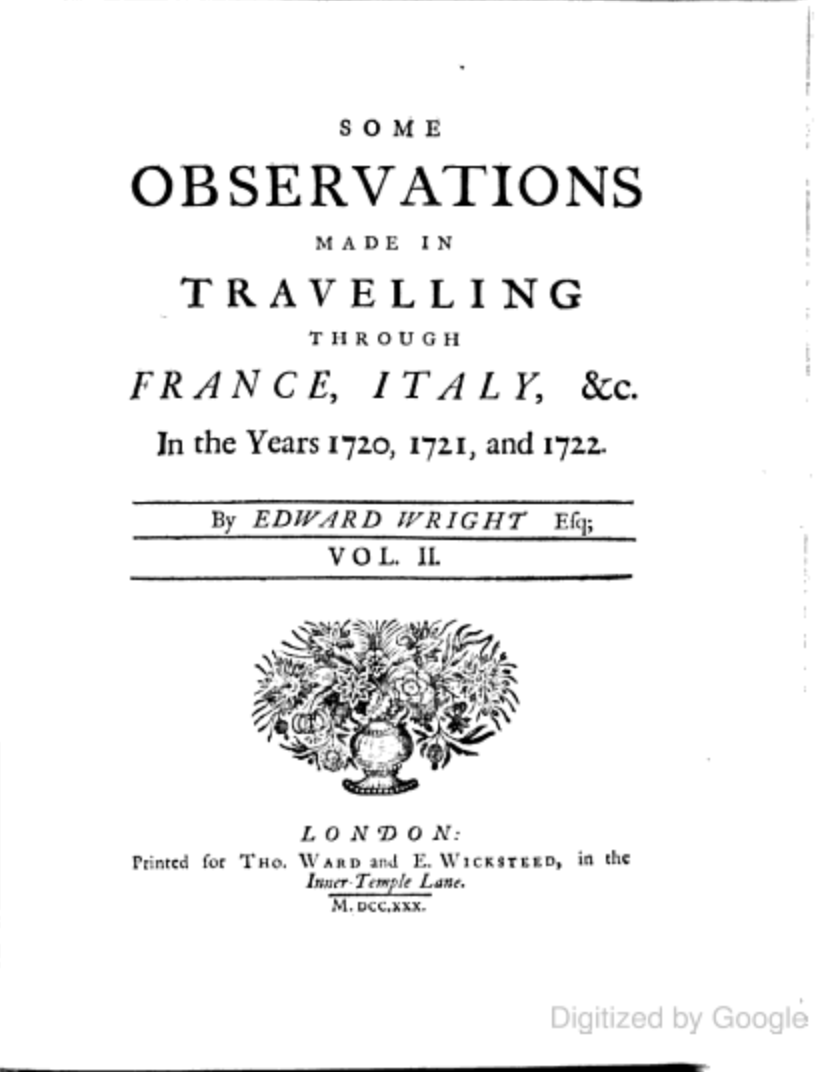 Reading Wright’s travel account on Italy is interesting in at least two respects. While following the established tradition of travel literature, his book shows new developments in the genre. Wright’s itinerary followed that of many other English travelers of the time. His journey started with crossing the English Channel. He traveled across France via Paris and Marseilles and reached Italy by ship, with Genoa the first city he visited in Italy. He then traversed Italy to the Adriatic side, reaching Venice and travelling along the coast before returning to the Tyrrhenian side and going up along the left side of the Italian boot. Thus Pisa was part of the second half of his travels in Italy. Following tradition, his entry on Pisa focuses on the monuments in the Piazza del Duomo:  Dome, Camposanto, Baptistery and the Campanile. What is completely different here in comparison to previous travel literature on Pisa is that more attention is given to  the Camposanto than to other monuments in the Piazza del Duomo. Among the literary sources gathered here, his is also the first one that devotes many paragraphs to describing the frescoes and notes his own impressions of them. Besides this preoccupation with art, there is also mention of the word ‘Gothik’ for the first time among the English literature gathered here, used to describe the architecture of the Camposanto. This reflects the beginning of an increased interest in the medieval period, which became associated, sometimes imaginatively, with Italian landscapes.[1] / DJ

“The Campo Santo is built of the same length and breadth, they say, as Noah’s Ark was: Its inner Area is encompass’d with a curious Cloyster of white Marble, and is filled with Earth which was brought from Jerusalem, as Ballast in the Gallies of the Pisans, when they returned from warring with the Turks, and from thence takes its Name; it was begun to be built in the Year 1200, and was finish’d in 1278. It is a most delightful Structure, tho’ Gothick: The Pavement, which is all of Marble, with Divisions of several Colours, has under it the Sepulchres of the then noble Families of Pisa etc. And if departed Souls have any pleasure in the Position of the Carcasses they have left behind them, sure those of this place have a large proportion of it. All along the Wall of the Cloysters, next the Area, under the Windows, are antique Sarcophagi of white Marble, with Basso-Relievo’s. The other Walls are all pained in Fresco, quite round, and from top to bottom, by some of the first Restorers of Painting in Italy, after the terrible shock all Arts had undergone there, by the Incursion of the barbarious Nations. The principal Hands are, Giotto, Mecharino, Buffalmachi, Benozzo, Sorio, Orcagna etc. The Subjects are chiefly Scriptural, with an Addition of some of their own Legends, and other Fancies, which have some Particulars whimsical and extravagant enough.

To begin with the Side we come in at, which is the South Side; The first design at the East End of it, is what indeed more particularly suits a Coemeterium; they call it the Triumph of Death. The three next are, Judgment, Paradise, and Hell. The follow what they call The Lives of the Hermits. After that, the History of the great Saint and Patron of Pisa, S. Rainerius, in six Compartiments. Then, the Stories of some others of their Saints. Last of all, on this side is the Story of Job, in six large Compartiments, by the famous Giotto. All these are contain’d in the South Side. […] At the East end is a Chapel; and on each side the Entrance into it are likewise Paintings. […] On that toward the South are the Cruxifixion, Resurrection, and Ascension of our Saviour.

And now, having taken a general View of the Designs, and being come again to the Point where I began, I will mention a few Particulars in some of them. In the Piece first mention’d, Death is represented by an ugly old Woman with a Scythe, flying with black Wings: Heaps of Carcasses lie under; Emperors, Kings, Popes, Poor and Rich, all confused: Angels are taking the Souls of the Just out of their Mouths, in the shape of little naked Infants; Devils, those of the Reprobate; which are represented more gross. An Angel and a Devil have got that of a fat Friar between ‘em, in the Air, tugging hard, one at each end, which shall have him: A Crowd of People below, old, poor, lame, and miserable, as wishing for Death, but she rather directs her Scythe to some gay young Persons of both Sexes, who are making merry in a pleasant Shade of Orange-Trees etc. In a corner of this piece is represented what they say is the Property of the Jerusalem Earth (alluding to that in the Area) to reduce a Body to a Skeleton in twenty four Hours: In the first eight Hours it swells; in the second, the Swelling is fallen flat, the Body corrupted, and Worms crawl out; in the third it is reduced to a Skeleton: But till some good Proof be produced that this is really the Property of the Jerusalem Earth, I shall believe it only an Instance of the Triumph of Death, which it was the Painter’s Intention to represent in the general Piece, in several Manners. However, in this Condition lie three Carcasses, in so many several Sarcophagi; and there is one who shews them to three great Persons who come towards them on horseback: One of them leans back, with much dislike, and holds his Nose; the Horse pokes out his Head, as frighted, and snorting. On this Piece is written,

Nor Wisdom’s Guard, nor Riches, join’d, / Nor noble Birth, nor val’rous Mind / Avail against Her (sc. Death) Blow.

In the Piece of the Last Judgment, the Painter has put several particular Persons of his own Friends in Paradise, and among the rest, Pope Innocent IV. A Friar, who is got among the Blessed, is lugg’d out by an Angel to take his Station on the other side.

In the Representation of Hell, a great monstrous Devil sits in the middle, with Flames as it were shooting from him each way: His Underlings are variously employed in inflicting Torments, some with Scourges, which they call Disciplines, and several other ways: They are roasting one before the Fire, with a great Spit run up through him; a little Devil is turning the Spit at one end, the other end of it is in the Mouth of one of the tormented. – The piece of Roast-meat, so spitted, they tell you, is a Florentine. – Very whimsical Fancies in so serious a Subject! King Solomon is plac’d in the middle between Paradise and Hell, the Painter not knowing where to put him, because (as they say there) it is a disputed Point among the Doctors whether he be saved or damned: They’re well employed, sure, in such Disputes! In the Life of S. Rainerius is represented a Passage between that Saint and a Vintner, who brought him Water among his Wine. The Saint shews him the Consequence of such Practice, by pointing out to a Devil, who sits perch’d upon a Hogshead in the form of a flying Cat. The Saint miraculously separates the Water from the Wine, and pours it distinct upon the Ground. […]

These are perhaps more than sufficient for a Specimen of the Manner of Thinking of those old Masters. Mich. Angelo, in his famous Piece of the Last Judgment, and Zuccaro in his Cupola of the Dome at Florence, seem to have retain’d a good deal of the same ludicrous and capricious way of Thinking in such Subjects.

The Painting in this fine Cloyster is most of it hard, according to the Manner then in use; nor is there any great Observance of the Chiaro Oscuro (Raphael himself, a good while after, was scarce come into it;) but many of the Countenances are very expressive and good, particularly in those of Giotto and Benozzo. In such Pieces where there is Architecture represented, (as particularly in the Story of Job by Giotto,) it is very accurately perform’d, according to the Taste of those Times.”