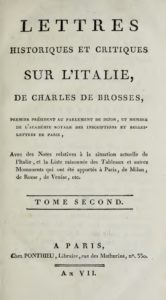 Born into an aristocratic family in Dijon, Charles de Brosses studied law and was later appointed the president of the parliament in his hometown. As a scholar and philosopher, he had many interests, such as history, philology and linguistics. De Brosses  mostly stayed in Dijon and its surrounds during his lifetime, but between 1739 and 1740, he travelled to Italy. From Dijon, he headed to Avignon and sailed from Antibes to Genoa. In Italy, he visited major cities such as Venice, Bologna, Florence and Rome, travelling as far as Naples. During the trip, he sent letters to his friends with his impressions of what he saw and experienced. Lettres Historiques et Critiques sur l’Italieis a collection of those letters, published posthumously in 1799. Honest remarks are characteristic of de Brosses’ letters. Interestingly, he refers to the style of architecture of the Camposanto as gothic. In his view, the Camposanto is a rather strange place, and he criticizes the frescoes, describing them as odd. /DJ

The campo santo, or cemetery, is the third piece [after the Cathedral and the Baptistery], more unusual than the two preceding ones. It is a large square cloister that encloses an earthen courtyard brought from Jerusalem, which, it is said, better than any other, cheers up the spirits of the poor dead. The cloister is of gothic architecture, quite pretty, all paved with marble tombs, for the most part containing something of note. A great number of ancient tombs have been arranged along the walls, and these gave rise to the learned work of Cardinal Noris, Cenotaphium Pisanum. There are also some modern ones, the best of which are those of the jurisconsult Decius [=Filippo Decio] and Buon Compagni [Boncompagni], uncle of Pope Gregory XIII. The walls are all painted in fresco by Giotto d’Orcagna, Benedetto, etc., who represented the stories of the Bible in a very strange, ridiculous, wicked and curious way. I remember a Noah showing his nakedness, near to which is a young girl who, covering her eyes with her hand, spreads her fingers with all her strength not to see.”