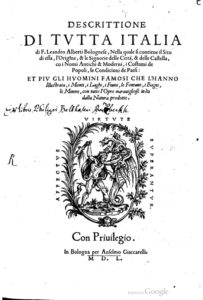 Leandro Alberti, born in 1479 in Bologna (where he probably also died in 1552), was a Dominican friar and historian. He studied under the Bolognese rhetorician Giovanni Garzoni and in 1493 he joined the Dominican order. After he finished his philosophical and theological education, he went to Rome to serve as a secretary to his friend Francesco Silvestro. In 1517, he published six volumes of a treatise on the famous men of his order in collaboration with some of his friends such as Giovanni Garzoni among others. He was also part of the inquisition, probably as early as 1544, although he only used the title ‘inquisitore di Bologna’ from 1551. It is not clear if he remained official inquisitor until 1551 or 1552, the year of his death.
Alberti published several works, but he is mainly known for his Descrittione di tutta Italia, which was published in the vernacular in Bologna in 1550, and was followed by a Latin translation in 1567. The Descrittione is almost 500 pages long and was dedicated to Henry II of France and his wife Catherine de Medici. To a large extent, he follows the earlier work of Flavio Biondo. The book is divided into different regions of Italy. In comparison to Biondo, he divides Italy into 19 rather than 18 regions. This expansion is due to the fact that he added the Italian islands (not mentioned in Biondo’s work) as part of his description. He is also more precise in dealing with his sources and is clearer in presenting them. Still, he doesn’t see his broad collection of materials through a critical lens and often follows Raffaello Maffai or Annio da Viterbo. Viterbo was a Domincan friar and is known to have faked historical documents. In the Descrittione, Alberti presents historical and political, but also topographical and archeological descriptions. One can find a description of Pisa over several pages, where he mentions the Camposanto and the legend of the holy earth that was brought to Pisa by Archbishop Ubaldo after the failed Third Crusade. This makes his work a valuable source for any study of literature mentioning the Camposanto.

It is true that after three days they made peace at the behest of Gregory VIII, who came to Pisa. They sent their Archbishop Lanfranco with fifty galleys to Frederick Barbarossa who wanted to proceed to purchase the holy earth. It is true that Barbarossa drowned, and the ship filled with the holy earth returned and this holy earth was made Camposanto. For them, the friendship with Frederick, the second enemy of the church, was more important than the observance always held by the pontifex and other churchmen. At the suggestion of the aforementioned Frederick, they captured Giacomo Vescovo Prenestino and Odone, both cardinals of the Roman church, and many other prelates who travelled from France to the Lateran Council, where Pope Gregory IX and other prelates against Frederick met.