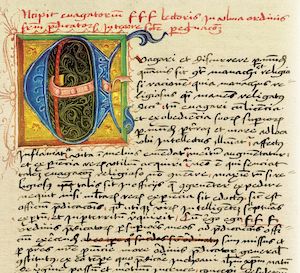 Born as Felix Schmid in Zurich, Fabri entered the Dominican order as a young man, and from 1468 on was a member of the Dominican convent of Ulm. In 1480 and in 1483/84 he undertook two pilgrimages to the Near East, and after his return from the second journey he composed a long and detailed account of his experiences. Until the first print edition in the mid-nineteenth century, this text was accessible only through manuscripts. Fabri’s fame as one of the most interesting authors of pilgrim books is the result of his modern reception.
The citations that we have chosen for our collection of sources deal with the Akeldamah in Jerusalem, the burial site for Christian pilgrims. Like Marco Bartolomeo Rustici, Pero Tafur and Fadrique Enríquez de Ribera, Fabri maintains that the holy earth present in the Camposanto of Pisa was taken from this particular site and shares the same properties of rapid decay. It seems therefore that in this period, the connection between the Akeldama and the Pisan cemetery was part of an oral tradition that circulated in Jerusalem. / DG

“About this field we are told in Matt. 26 that, before the Passion, it was called the Potter’s Field, because it was owned by some potter. The Jews bought this field for those 30 pieces (of silver) which they gave to Judas for the Lord Jesus, that they might bury strangers therein, whose bodies had aforetime been cast forth unburied. […]

On the field itself stands a building with four walls, like a low, square tower, covered by a vault resting on the side-walls. This vault has nine round openings in its upper part, through which the bodies of the dead are thrown. Now, since it stands upon the slope of the mount, on the upper side, where one comes down the mount towards the building, one can walk on the vault without climbing. […]

Of this field they relate for a truth that the bodies of the dead when placed in it are straightway reduced to dust within three days and the dry bones alone left. So they say of the holy field (campus sanctus) which is in Rome, beside the church of St. Peter, to which earth was carried from hence over the sea and strewn over that field. So likewise the people of Pisa, when they bore rule in Syria, took earth from this field, freighted ships therewith, carried it to Pisa, and made a most costly burial place therewith for the great men of their land. In these three cemeteries bodies are dissolved within three days, whereas in other cemeteries they are hardly altogether consumed in eighteen years.”